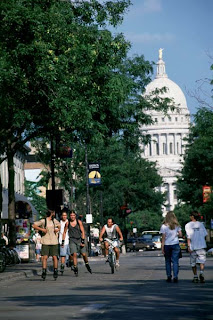 In today's edition of Wisconsin newspaper The Capital Times, reporter Jessica Vanegeren has a well-researched article out about the promise of voter-owned elections (also Fair Elections, public financing of elections) for municipal races in Wisconsin. In concluding the article, she takes her readers halfway across the country to look at a couple of exciting developments in Rhode Island state politics, including the on-going State Representative race in Narragansett/South Kingstown. It was thrilling to be interviewed on an issue I feel so strongly about:

"While the data indicates the number of legislative seats held nationally by women has remained stagnant, Libby Kimzey, the former head of Rhode Islanders for Fair Elections, an organization that since 2006 has been pushing for public financing of all state elections, still supports the concept.

“I believe (public financing) is a crucial gateway to a better representative democracy,” Kimzey says, “Teresa and I share the conviction that money alone shouldn’t determine an election.”"

Consider the revelations of each quarter's filing reports: in the State Treasurer's race, in the Attorney General's race. Too often in politics, on the state and national level, the candidates we support weaken or drop out entirely because they don't have the deep pockets of their opponents. The homogeneity of our state legislature is a poor reflection of the diversity of our state, and having the full range of perspectives involved in the decision-making process would give the citizens better public policy.

In the ProJo editorial pages, there is a constant refrain: 'the General Assembly is corrupt, lazy, and dominated by special interest groups.' What the Progressives, the Moderates and the Conservatives share is an interest in having new voices heard on the State House floor. Entangled with power of money is power of name, a problem magnified in Rhode Island where everyone knows everyone, and half of those share last names. One need look no further than the current slate of gubernatorial candidates to understand the difficulty in establishing new players as worthwhile candidates with worthy ideas.

Down in South County's District 34, with an early start, hard work and passionate grassroots support, the Tanzi campaign has raised over $11,000, positioning her as a strong candidate. However, the incumbent could spend an absolute minimum of his time and energy fund-raising, then simply cut a check to his campaign. According to his campaign finance reports, he already has $40,000 in loans outstanding.

In the continued absence of a public financing system for state legislative seats, we need your help to bring the choice to the voters on September 14. Today, you can support a public advocate of voter-owned elections, progressive community leader Teresa Tanzi.