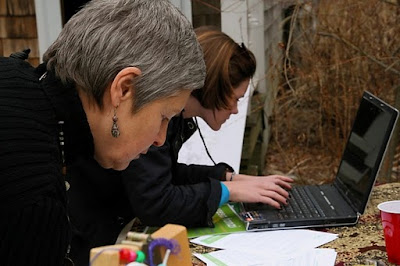 When Teresa decided to run, the conventional wisdom said she could never build an organization or raise enough money to compete with her opponent - a five term State Representative from an established political family, entangled in the web of General Assembly insiders.

The growing local movement to win a new voice for South County at the State House has again proven the skeptics wrong. Dozens of members of the community helped the Committee to Elect Teresa Tanzi out-perform her opponent over the first fundraising quarter of 2010 ending on March 31st. This September's primary election gives voters a real choice to send someone like Teresa to the State House, someone connected to the community, and who will bring fresh new ideas and energy to resolve Rhode Island’s deep challenges. Voters from Peace Dale, Narragansett, and Wakefield have responded over the last three months. Teresa’s campaign was able to win the fundraising battle in the first quarter not through a few fat checks but rather from a large number of small individual contributions. Nearly two-thirds of every contribution received was less than $50 and many came from people who never thought they would be involved in politics. Ryan Blazejewski from Narragansett said,

"I recently met Teresa Tanzi at a house party that my friend Melissa hosted in Narragansett. I was impressed with Teresa's fresh ideas and optimism for improving our state and her connection to the South County community. Her integrity is exactly what we need more of in every level of government. After the house party I went online and made my first ever contribution to someone running for office."

Supporters of Teresa, like me, are thrilled about our campaign’s fundraising success over the last few months, but we have a long way to go until September 14, and not one vote has yet to be cast. Get involved today by making a small contribution, hosting a house party or writing a few postcards to your neighbors!