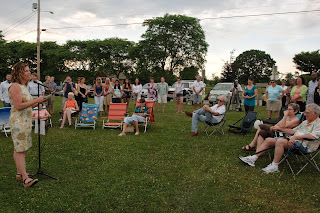 Wakefield, RI – This Tuesday, June 29th 2010, Teresa Tanzi officially announced her candidacy for State Representative of District 34, including Narragansett, Wakefield and Peace Dale. Tanzi is running as a Democrat and will challenge the ten-year incumbent, Rep. David Caprio, in the primary election on September 14th.

The announcement, attended by nearly fifty supporters and community members, was marked by great enthusiasm and support for Tanzi and the campaign. Attendees gathered in the hot late afternoon breeze at Pt. Judith Pond in Wakefield. The pond, the district’s waterfront and all its natural resources were central to Tanzi’s speech. Relating the developments made at Salty Brine beach in Narragansett to the campaign, Tanzi stated, “The newly erected wind turbine and solar panels at Salty Brine beach have been installed to independently power the facilities at what is one of the most handicap accessible beaches on the east coast. I take inspiration from both of these innovations… Like Salty Brine, I am and will be as your representative accessible to all.” 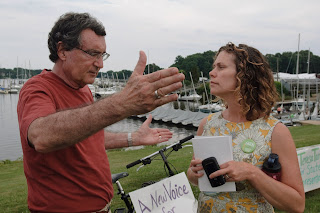 In addition to investing in renewable energy, Tanzi focused on the state budget, taxes, economic development and preserving the South County way of life. On her connection to the district, Tanzi said, “This is the community I chose to come to 10 years ago with my husband Eric to build his business, the community I chose to raise my four year old daughter Delia in, and the community I seek to represent in the State House this fall.” 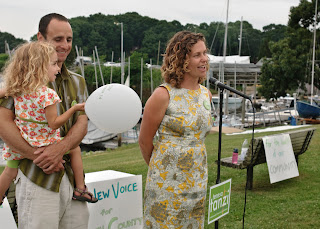 In addition to Tanzi and her campaign manger, Libby Kimzey, three community members added their voices in expressing support for the campaign. Alan Woodmansee, local engineer and sailor, Ann Marie Denelle, school and family advocate, and Leslie Chouinard, Peace Dale Neighborhood Revitalization Inc. President, spoke about their different backgrounds and reasons for supporting Tanzi. Their message was clear: the community wants a new voice representing South County in the State House, and they want Teresa Tanzi to be that voice.

Kimzey expressed that she was thrilled with the successful event. “Tonight’s kick-off really underlined the great strides our all-volunteer campaign has made. We have a lot of work in the months ahead, and are so grateful to have such fantastic volunteers. Our team of supporters continues to grow every day.”

The announcement event was followed by a reception fundraiser at Hanson’s Pub on the pond, featuring music by local bluegrass band Saddle Up the Chicken. The night marks the most recent of several important developments in the campaign, including highly successful volunteer drives, neighborhood canvassing and an enthusiastic outpouring of support at community events.