STATE HOUSE – Rep. Teresa Tanzi served as a panelist earlier this month at a Council on State Governments forum on the #MeToo Movement and women in politics. 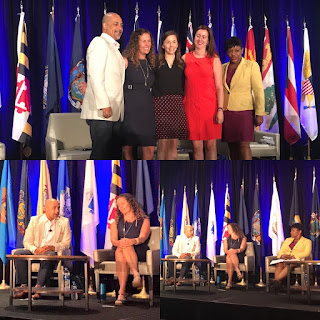 The panel discussion was part of the Council on State Governments Eastern Regional Conference annual meeting and regional policy forum, held in Rye Brooke, N.Y, and attended by state and province leaders from the eastern parts of the United States and Canada.
“The important discussion of how we stop harassment in the workplace is still playing out all across the world. Ultimately, we need a two-pronged approach: change the laws and change the culture. Of course, changing cultural norms takes time, but as leaders in government, we must use our positions to quickly update and enact stronger laws, then lead by example by instating clear internal workplace policies, reporting procedures and strong actions that will foster a cultural shift. That is a process that can be slower and more complicated than it need be, but as was evidenced by my colleagues from other states, with true leadership, it is possible. We must remain committed to enacting better protections, because the status quo is leaving people across our state vulnerable,” said Representative Tanzi.
Representative Tanzi (D-Dist. 34, South Kingstown, Narragansett) this year led a legislative commission that examined sexual harassment laws and policies. The commission was created in response to the #MeToo movement and Representative Tanzi’s own story about interactions with a fellow legislator.
The CSG panel examined the response to new and pending legislation to promote improved workplace behavior, and improved processes for investigating claims of harassment confidentially and fairly, and a transparent way of dealing with those who cross the line. Besides Representative Tanzi, the panel included Maryland Speaker Pro Tempore Adrienne Jones, Rep. Christopher M. Rabb of Pennsylvania and New York Assemblywoman Nily Rozic and was moderated by Kelly Dittmar, Scholar at the Center for American Women and Politics at Rutgers University.