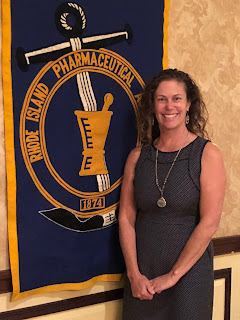 The Rhode Island Pharmacists Association honored Rep. Teresa Tanzi with the 2018 Charles Hachadorian Jr. Award. The award is presented annually to a non-pharmacist who has recognized the efforts that the profession of pharmacy has made to healthcare and has actively supported those efforts.
Representative Tanzi has long been a supporter of pharmacists in Rhode Island. As one of the representatives representing South Kingstown, she has advocated for University of Rhode Island and its College of Pharmacy throughout the years, and has hosted its pharmacy students at the State House on Pharmacy Day for several years. This year, Representative Tanzi was the sponsor of pro-consumer, pro-pharmacist legislation (2018-H 7700) to prohibit gag clauses in pharmacy benefit manager contracts that ban pharmacists from telling consumers about cheaper ways to purchase prescriptions or more effective alternatives.

“I feel tremendously honored to be recognized by the Rhode Island Pharmacists Association, whose members contribute enormously to the health and wellbeing of the people of our state. It’s a privilege to be their advocate at the State House, because I know pharmacists are the front line of health care and are the most accessible providers to patients. They are hardworking, dedicated health professionals who are looking out for Rhode Islanders’ wellbeing." said Representative Tanzi.